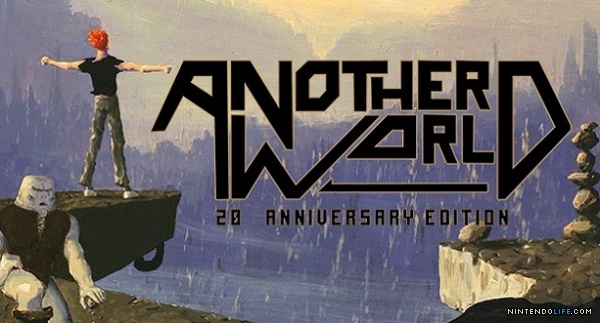 Another World 20th Anniversary Edition is the re-release of Delphine Software’s 1991 Platformer and adventure title, also known as Outer World in some areas. This updated 2011 edition comes with the ability to swap between the unique cinematic style of the original or the unique cinematic style but in better definition. Basically it’s the choice of do you want to play the game or guess at a blurred screen. It is available to play on PS3, PS4, Xbox One, Windows, OSX, Wii U and many other systems. You play as Lester, a genius physicist with enough money to buy a Ferrari. Whilst working in a lab during a thunderstorm you are transported to an Alien planet after lightning strikes the equipment opening up a wormhole. After fighting off some of the indigenous fauna you are taken captive by the inhabitants of the planet. You and a silent yet loyal friend escape and must make your way through this world battling soldiers, nature, and worst of all, puzzles!

I’m going to be totally honest, I only got this game for the achievements. But I was surprised by how much I got for the £6 (roughly) I paid for it. Not the good surprised, more the infuriated surprise as I repeated monotonous section after monotonous section. Sure the achievements are easy to obtain and the game is relatively short, in terms of linear story, but for once the 1000G just wasn’t worth it.

The Narrative – Aside from a handful of brief and silent cut scenes there is very little given narrative to this game. Whilst this is a great attribute to many games, as it allows the player to create their own narrative through their style of game play. Another World doesn’t have the expansive gameplay to allow this. Therefore the player is left not really caring about the protagonist and is far from invested in the reasons for escaping. Another World does not capture the imagination enough to make the player emotionally invested in what unfolds onscreen. There is no player or even story development outside of the linear and lacklustre progression of the game. Characters remain emotionless pixels on a screen and the only incentive to finish the game is so that you can finally stop playing.

Tone – I wouldn’t even consider this game as having a tone, there is little music to bring any ambience or atmosphere to the gameplay. Honesty I don’t even know how I would describe the art style, but I’ll give it a go. The artistic style paints a slightly and weird sadistic undertone that is not represented by the game, although it’s not enough to alter the feel of the game. Personally it just felt like I was playing an Internet browser game from the early 2000s. On the plus side the character design, tone, art style and sound design all suited each other and were all evenly minimalistic.

Controls – This is where my biggest bugbear came in, the controls and movement mechanics. Usually a bad game carries clunky and heavy movement and fighting mechanics, making fights irritating and slow. However Another World overloads their controls making movement and fighting a random chance event. On the Xbox One controls the ‘A’ button accounts for running, shooting, picking up the odd weapon, creating a barrier (holding down the ‘A’ button slightly), and firing a power charged shot (holding down the ‘A’ button for longer). In a game where the slightest mistake in combat can set you back a good 5 minutes of annoying gameplay having a 30% chance of the same button performing the wrong command is less than ideal. This system is understandable for the original release for Atari ST and Amiga, however surely this would be a simple fix in the 20 years since the original release where 6-7 of the buttons and controls on the Xbox One controller were unused. The camera remained stationary and acted in a similar way to any side-scrolling game, so this did nothing to rescue the game but made the game playable.

Difficulty – The game was challenging, there were many aspects where you had to travel to different sections of the location in order to piece together a solution. That is one of the few redeeming factors about the game; you did need to engage your brain on a few occasions to figure out how to proceed. A few challenges were trial and error based, whilst others may not have been difficult but required good reactions and quick thinking to succeed. For the most part there would be nothing wrong with those challenges, however the limited save points meant that using trial and error to figure out one challenge would mean repeating several of the more finicky parts of the game more than once. This lead to great frustration and just a touch of anger as I rage quit like never before. Turning a ‘meh’ achievement driven game into one that requires a long walk and deep breaths after playing, and not in the rewarding fun sense like Dark Souls or adrenaline release of a GTA V heist. For a replayability factor; I wouldn’t touch the game again after completing it, it’s taking me long enough to actually continue the game in order to get all the achievements.

For the majority of my play-through I thought the game was ‘alright’, nothing special but worth the couple of hours I sunk into it. However the more I progressed the worse the game got in my opinion. The repeated use of poorly structured controls and the constant repetition of 5 minutes of game (both down to my terrible gaming skills and trail and error systems) made this game unbearable. The only saving grace for me was starting a new game, handing to controller to a friend and watching their pain as they died in the most pathetic ways, grew frustrated and defeated just as I had done moments earlier. I have been harsh on this game, in reality the original was the AAA title of it’s time, it was innovative and paved the way for gaming to progress into what it is today. The 1991 version will always remain a stoic pioneer in gaming, but it never should have been brought into the 21st Century.

Gameplay – The gameplay itself wasn’t terrible, it didn’t stand out as it remained true to its original 1991 release. If I reviewed it upon its original release then the score would have doubled, however the simple and repetitive gameplay mixed with the abundance of decent indie released scored Another World pretty averagely. However having actually tricky puzzles to solve did boost the score a little. Score: 5

Visuals – A unique art style is definitely the best way to describe it, but only if you kept the Anniversary Editions higher quality image. I’m not an artsy person so I cannot comment heavily on this topic, however the minimalistic style didn’t impress me. The visuals did work with the feel of the game. Score: 4

Sound Design – Very basic if present at all. It wouldn’t surprise me if they never touched the sound design from the original, but all sound effects were not in proportion to the game and were a touch blown out. One you could happily play on mute. Score: 3

Story – The lack of interaction between characters and any information surrounding the few cutscenes meant that this game had a skeleton of a story. This would have placed the score mid table, or if you can develop the character high table. However the lack of character development or general plot development meant this game lost out in this score. Score: 3

Controls – Four controls, one button. Need I say more? Every mechanic felt clunky and slow at best. The response time between button pressing and action was pretty decent but was enough to frustrated in areas of fine margins. The potluck that I called the ‘A’ Button did leave a sour taste in my mouth and in many ways ruined the experience for me. Score: 2

Difficulty – Another world did provide some challenging and rational puzzles. There was no sign posting or hints (outside of looking up Walkthroughs) so figuring out a solution was rather rewarding. However the amount of puzzles between save points was rather infuriating at times, it meant (for me personally) the high repetition of some monotonous tasks and finicky challenges where I was prone to make a mistake and repeat the process again. So due to my issues with this section being more of an individual problem rather than a poor mechanic I have left a favourable score. Score: 6

I wouldn’t recommend paying full price for this game, however if it becomes available for free or for £2-3 (~$4) I would suggest giving it a go. For achievement hunters there is the reward of 1000G at the end. However if you are prone to frustration at failing the same section of the game for an hour then do not touch this game. Another World was great for it’s time and should be remembered as a landmark title, but experiencing this 20th Edition makes it hard to think of this game as anything other than subpar.

Twisted Bard Gaming Podcast 3: Is the Xbox Game Pass worth it?