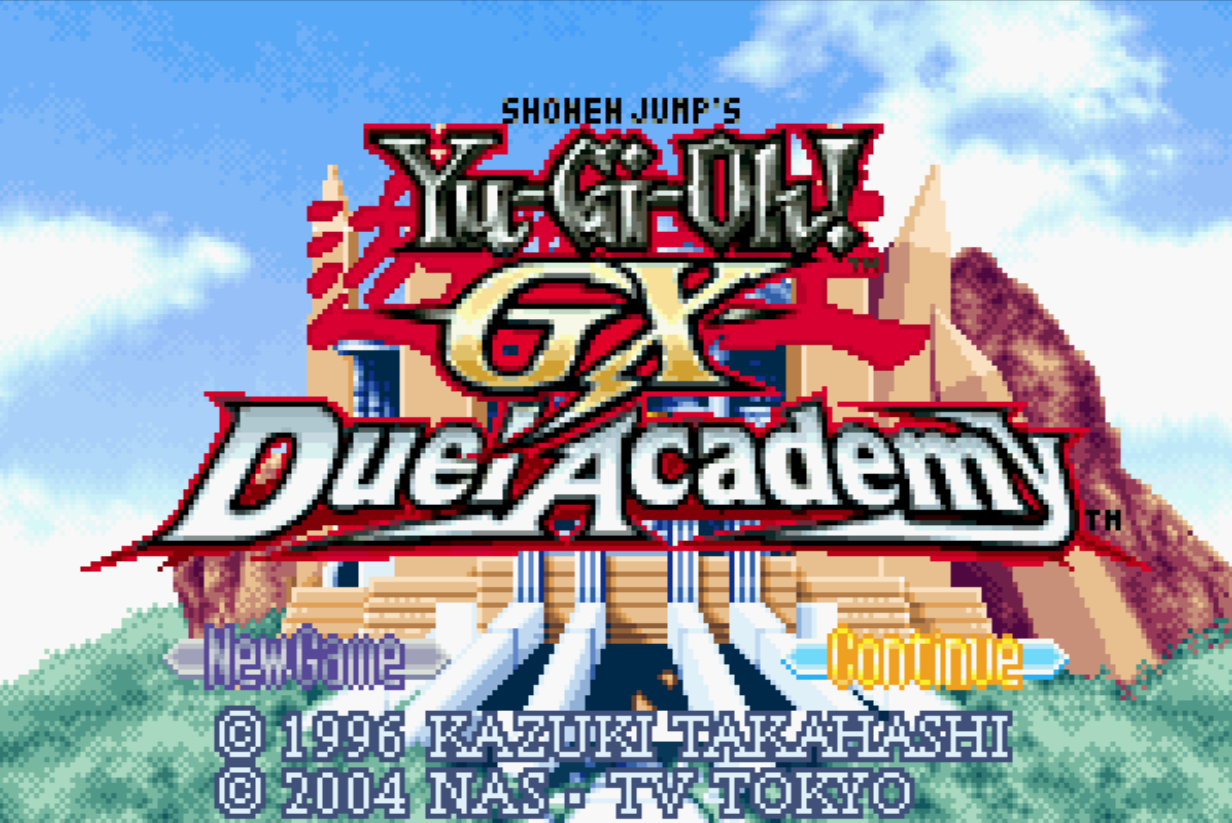 The gameplay in Yu-Gi-Oh! GX: Duel Academy is very similar to the previous Yu-Gi-Oh! Gameboy Advance video games. A few additions, such as the monthly exams and the dorms, enrich the experience and keep it from being raw dueling. But dueling is still the main feature. The monthly exams are tests that you take to change dorms and duelist rank (Title). Each dorm has different duelists, so you need to join all of them to duel everyone. The rank is important because some duelists won’t accept your challenge if you have a low rank. The written exam is what killed me. You actually need to know about card theory in order to be King of Games.

The Timed Duels in the exams are also interesting because they help you learn strategies and think outside the box. If this is your first time playing the Yu-Gi-Oh! Trading Card Game, there’s a tutorial that explains how to duel and build a deck. I recommend it at least for the deck building part. There are a total of 1200 usable cards in Yu-Gi-Oh! GX: Duel Academy. Many cards are from Yu-Gi-Oh! GX, but there are also a lot of classic ones such as Blue Eyes White Dragon, Summoned Skull, etc. To my personal annoyance, some cards that I used in previous games are not in the game. Even one of my main cards, Dark Necrofear, was removed, and for some reason shitty cards like Ryu Kishin are still in the game.

The following six paragraphs contain a lot detailed examples of the gameplay, and henceforth, a lot of technical mumbo jumbo. Feel free to skip them. Some duelists always seem to draw the same cards on the first turn. Jaden Yuki, for example, almost always starts the duel with Skyscraper and Elemental Hero Burstinatrix. There are times when I start with a hand full of Spell Cards, and that never seems to happen with the AI. Heart of the Cards? There are also a couple of glitches and certain card effects don’t work properly. An example is Royal Decree, which is a Continuous Trap Card that prevents the use of other Trap Cards. While Royal Decree is active, Magic Cylinder (a Trap Card also) can still be used.

The Trunk (where you build your deck) makes it easy to locate cards and build a deck despite the high number of cards. The cards can be sorted according to Attack, Name, Type, Attribute, etc. Even if there are a lot of cards in a certain section, you can press B to scroll down quickly. Another convenient feature is that when you send a Ritual or Fusion Monster to your deck, you have the option of sending along with it the necessary cards for summoning it without having to locate them. An example are Magician of Black Chaos (Ritual Monster) and Black Magic Ritual (Ritual Spell Card) .

Unfortunately, viewing the card descriptions can be tiring. Whenever you want to know what a card does, you need to select that card to view a detailed or quick description. But if you want to view another card’s description, you have to exit the first card’s description, and then select the second card. You can’t switch between descriptions. In my case, that would have helped a lot since I didn’t know the effect of many cards. It was annoying to be reading a lot of card descriptions, and sometimes if a description was too long, I didn’t bother reading it or learning the card’s effect. Overall, however, I didn’t have a lot of trouble learning the effects of new cards. It was only with certain cards.

Yu-Gi-Oh! GX: Duel Academy still keeps the timing mechanic. Due to their nature, some Spell and Trap cards, such as Mystical Space Typhoon, can be activated practically at anytime. So the game is constantly reminding you when you can activate the card. The timing mechanic permits you to choose at what phase/situation you want the reminders to come up, but you’re still getting them. More than once I activated a card just to get rid of those annoying reminders, instead of saving it for a special occasion. It’s understandable but at the same time tiring.

Buying cards is also an unpleasant chore. After each duel you get Duel Points depending on your performance. You use them to buy booster packs. However, as in real life, some booster packs contain Secret Rare cards. More than once I bought 99 of the same booster pack, and didn’t get that pack’s Secret Rare card. And since you need all 1200 cards to become King of Games, you’ll probably spend a lot of your hard earned virtual money buying a shitload of booster packs. Or you can just use the password machine. But you still need to see a list of the game’s cards, see which cards you’re missing, and find the passwords for those cards. Not exactly a lovely type of chore either. End of mumbo jumbo.

Yu-Gi-Oh! GX: Duel Academy is a 2D video game. The graphics are mostly great. The character sprites look lively. The backgrounds vary between detailed ones, such as the map, and other more washed out ones, such as your room.The pixels are more evident in the backgrounds than in the characters. Each character has also more than one sprite, and that gives dynamism to the dialogues and scenes. The background of the duel screen changes depending on the location, and it’s pleasant not having the same background in every duel. Animations for certain cards such as Exodia the Forbidden One and Destiny Board are also different from previous games.

The Background Music in Yu-Gi-Oh! GX: Duel Academy nicely fits the friendly and happy atmosphere of the game. A good addition is that during duels the music changes depending on whether you’re winning or losing. This can make a duel feel exciting and suspenseful. On the negative side, the quantity in tracks is less than in previous Yu-Gi-Oh! games. In Yu-Gi-Oh! The Eternal Duelist Soul, for example, there were much more tracks that played during duels. The five Tier 1 Duelists had their own duel and pre-duel theme. Other characters such as Yami Yugi and Kaiba had their unique pre-duel and duelling theme. In Yu-Gi-Oh! GX: Duel Academy, everybody has the same duel and pre-duel theme (aside from event duels).

There is no real plot in Yu-Gi-Oh! GX: Duel Academy aside from the events. During the events you get to interact with many of the series’ characters, whom I found likeable. Most of the events revolve around funny or dramatic situations that teach you a lesson. Despite being a game about a children’s card game, Yu-Gi-Oh! GX: Duel Academy does touch on some deep stuff such as the importance of having fun over winning. The infamous Heart of the Cards speeches are still of vital importance. Jaden Yuki is always butting in other people’s problems, and solving disputes with motivational speeches. The events are fun and they break the monotony of the otherwise mechanical duelling.

Yu-Gi-Oh! GX: Duel Academy follows a calendar in which certain events only happen at certain dates. If by any chance you miss them, you need to wait until next year. But it’s tiring to progress to the next year, even if you skip days. Another interesting feature is that duelling rules are changed at certain times, and characters change their decks accordingly. But once you become King of Games and clear all events, there’s really not much depth to the game aside from duelling and the monthly exams which feel like a chore after a while.

Yu-Gi-Oh! GX: Duel Academy naturally focuses more on the dueling aspect, and is repetitive. However the school thematic adds some freshness. The dueling aspect has its problems and the novelties wear off quickly which is why I give the gameplay a 7.5.
The graphics create a diverse environment easy on the eye. Some backgrounds are very detailed, however they can look a bit washed out and the pixels are evident. The pixels however are not as evident in the character sprites.The graphics do the job which is why I'll give them an 8.
The soundtrack fits the tone of the game but there is a lack in quantity, especially compared with older Yu-Gi-Oh! games, which is why I give a 7 to Sound.
There is practically no story in Yu-Gi-Oh! GX: Duel Academy. A lot of events do happen, but on a greater scale, there is nothing major happening which is why I give a 7 to Story.
Some events and the monthly exams keep repeating themselves after becoming King of Games. But there's not really a lot else to do which is why I give a 6 to Replayability.
Despite not knowing a lot about Yu-Gi-Oh! GX, I had fun playing the Yu-Gi-Oh! GX: Duel Academy. Completing it 100% is tedious but the overall experience is fun.