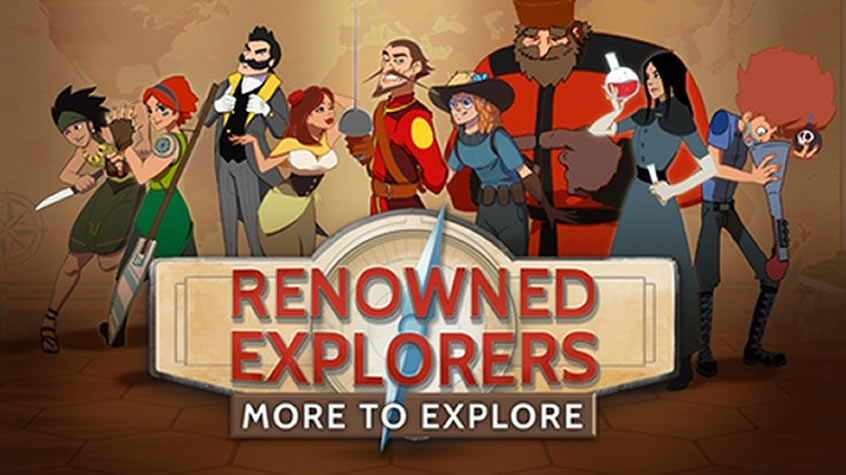 Renowned Explorers: More to Explore is the first DLC released by Abbey Games for Renowned Explorer: International Society available on Steam for Windows and Mac for £9 including the original game and More to Explore DLC . In this Strategy-Adventure game you hand pick a crew of 3 explorers from the Scientist, Scout, Fighter or Speaker class. Pick wisely as each class carries their own unique traits and strengths. Your Captain will provide an overall boost to the crew, taking the time to read the attributes of each of the 24 characters goes a long way when you’re stranded in unfamiliar territory. Go explore locations, adventure and gather treasures as your crew bids to become the most renowned explorer and place above French rival Rivaleux, but remember you only have 5 expeditions left. Search lost cities, hidden temples, isolated locations battling wildlife, local tribes and your rivals in search of treasure and loot. Obtain knowledge through Research, get rich through Gold, or build fame through Status, you choose how you are remembered.

This is a choose your own adventure style game, therefore the narrative should be a heavy focus. Abbey Games is clever here, they do have a very well written but simple narrative throughout the game. It is in depth as each challenge and place visited contains a story, interaction with NPCs, choices and facts. However if you do not fancy spending your time reading then these sections are very easy to skim through, however making a choice at the end may be a little tough for some challenges. In all my playthroughs, both skipping through and reading all sections, I still was absorbed into the explorers world and felt the desire to beat that damn Rivaleux and his cocky crew. One of the new additions brought into the More to Explore DLC was the Crew’s Campfire Story Cards. This mechanic was simple yet added a new layer to the narrative; after a certain number of Nodes (exploration points of each area) were visited you could choose to light a Campfire. Once this was selected you got to pick a card that would reward you with extra Research, Status, Gold, Treasure Hunts or other bonuses, but each card would also tell a story about one of the characters. This allowed you to engage with your crew in a simple game mechanic, I brought personality in such a small section of the game.

I loved the art style, character look and design of this game. Everything was bright, but not overwhelming. Everything had character to it, so much so that I felt bad for killing any sheep. The Cartoon style matched the relaxed and friendly atmosphere of the game, allowing the player to sit back and enjoy the experience. However I can say that after 5 hours of constantly staring at a screen playing this game I still enjoyed every scene. The style compliments the feel and overall tone of the game, and does allow the game to function relatively smoothly on lower quality PCs.

There was no use of voicing in terms of narration or characters. For me adding audible voices would ruin the feel of the game. All narration and conversation is done through text, and this choice by the developers to omit voices allows the player to really immerse themselves into the characters. The accompanying music is epic as an orchestra guides you through the menus and accompanies you to the edge of the earth, must be hard moving the Tuba through the Highlands. Every sound effect fits, it fits the style of each character and of the game. Sometimes a bit over the top, but nonetheless I never took any negative note of sound effects.

The game mechanics and navigation is a little daunting and confusing initially. There is a lot to the game at the beginning and the tutorial does drag on a bit as it tries to touch upon each section of the game. However once you are past the tutorial stage and into the meat of the game you do pick up the nuances of the game very quickly. I was worried during the tutorial and thought Abbey Games had over complicated what looked a promising game, but after my first couple of expeditions I was able to navigate the menus and make logical choices during missions without too much difficulty or thought. By my second play-through I could speed through most sections of the game knowing what was needed to increase my Renown. The controls themselves are basic and at times the constant repetition of controls can be tedious, however it does not impact on the game.

The mood battle system is a twist on an overused mechanic. You can battle enemies using three tactical methods; friendly, devious or aggressive. Each enemy unit has strengths and weaknesses against certain moods, an enemy whose armour is high may have a low speech defence and be vulnerable to ‘impressive’ speech attacks. Each class will have strengths in different attack methods (fighting or speaking) and will utilise different mood attacks (impress, excite, anger). This mechanic really makes you consider both the make up of your crew and how you approach every encounter, sometimes the dilemma is solved for you as extra rewards are given for certain victory methods. Defeating enemies with words and kindness is not only a fresh approach to conflict resolution but a lovely life lesson taught by Abbey Games, it’s not always the best tactic to solve conflict with violence. In a few scenarios solving a conflict in a certain style can change the outcome to an interaction with an NPC. I’ve gained trust in Highlanders by being so friendly to their neighbours that they’ve stopped fighting, I’ve tamed a pack of Hyenas by making them laugh too much and saddened Wolves so that they left me alone.

During your expedition you will be faced with a number of different challenges. Each challenge will require one of your team to complete. Each member will have a percentage of successfully completing the mission. This will change depending on the attributes and traits of the selected character as some of the challenges are better suited to certain attributes (such as engineering, quick-thinking, sneaking etc). These challenges are decided by a wheel spin, the higher the percentage of success the more “R.E” symbols are on the wheel, land on a skull symbol and you fail the challenge. Complete the challenge and you will be rewarded with resources, supplied, gold or treasure. Fail the challenge and you walk away with nothing, or even worse, lose a Resolve (the game’s life counter). The set up of the challenges makes the player pick their crew and crew loadout very carefully, then choose expeditions and challenges that suit their crew. So even though there is no particular skill involved in actually completing the challenges there is painstaking thought involved in preparing the crew for the expected challenges ahead.

Between Expeditions you are brought back to the Explorers Hub where you can visit different places to earn more Research, Gold, and Status by lecturing. You are also able to purchase items to boost your attack (speech and physical), defence (speech and physical) and trinkets to boost certain stats. There are academics, adventurers, traders and apprentices you can take on your expeditions who help you earn extra rewards. The Explorers Hub is also where you can open your overall skill tree and pursue attributes to increase supplies and any rewards earned. Each character can be levelled up and skills upgraded during the expeditions.

Renowned Explorers has two modes to choose from before selecting your difficulty. Discovery mode and Adventure mode:

-Adventure mode is a more perma-death version of the game. There is no forgiving, get your tactics wrong, lose all your resolve and it’s game over.

– Discovery mode is a more lenient game mode, it allows saving and reloading failed encounters, so you can test out different tactics and try new crew combinations.

After selecting the mode you have your normal choice of difficulty from Easy to Impossible (anything below hard disables Achievements). Playing on Normal allowed me to pick up the game mechanics and make mistakes without dire consequences. I started in Adventure mode and only lost all Resolve once, you soon learn your mistakes. There is a difficulty for every player to enjoy, where Normal can still provide a challenge whilst allowing the player to learn the mechanics. Where as Impossible give the player a customised challenge to push their tactical prowess to the limit. The chance mechanic of challenges makes the majority of the game pretty simplistic and not overly difficult. However lack of preparation or choosing the wrong battle causes major obstacles to overcome. Therefore the difficulty is decided by you.

I played a second time to see how Discovery and Adventure mode differed; I ended up completing the game 5 times. After you finish the game, by completing 5 expeditions and either ranking above Rivaleux or falling just short, you can carry on in Marathon mode. This mode allows the player to brush up any loose ends, collect all possible treasures, 100% every expedition and fully explore the map. Therefore a single game can last 10s of hours, but you can complete a single playthrough within an hour. This does not diminish the replayability factor of the game, as with 24 different playable characters in teams of three which according to my terrible maths leaves just over 2000 possible team combinations to test out (rotating the captain each time). Even at an absolute minimum there are about 4 different class combinations to choose from. This maths reasoning shows that Renowned Explorers has a huge replayability factor.

I came into this review with not too much expectation from this game. However after taking the time to learn the mechanics and read about the crew I was instantly absorbed into a new world of exploration. You control the tempo and feel of the game, you control the route you want to take and how you want to become the most Renowned Explorer. I completed the 5 expeditions a total of 4 times back to back (changing up my crew) and never felt like the concept or gameplay was becoming tiresome. The simplicity and unknown element made Renowned Explorers that much more impressive. This flew under the radar and I'm glad I got the opportunity to play it. If you are a fan of turn based strategy games and choose your own adventures then I highly recommend buying this game. If those genres aren't your cup of tea, then I do suggest giving Renowned Explorers a try, you won't be disappointed.