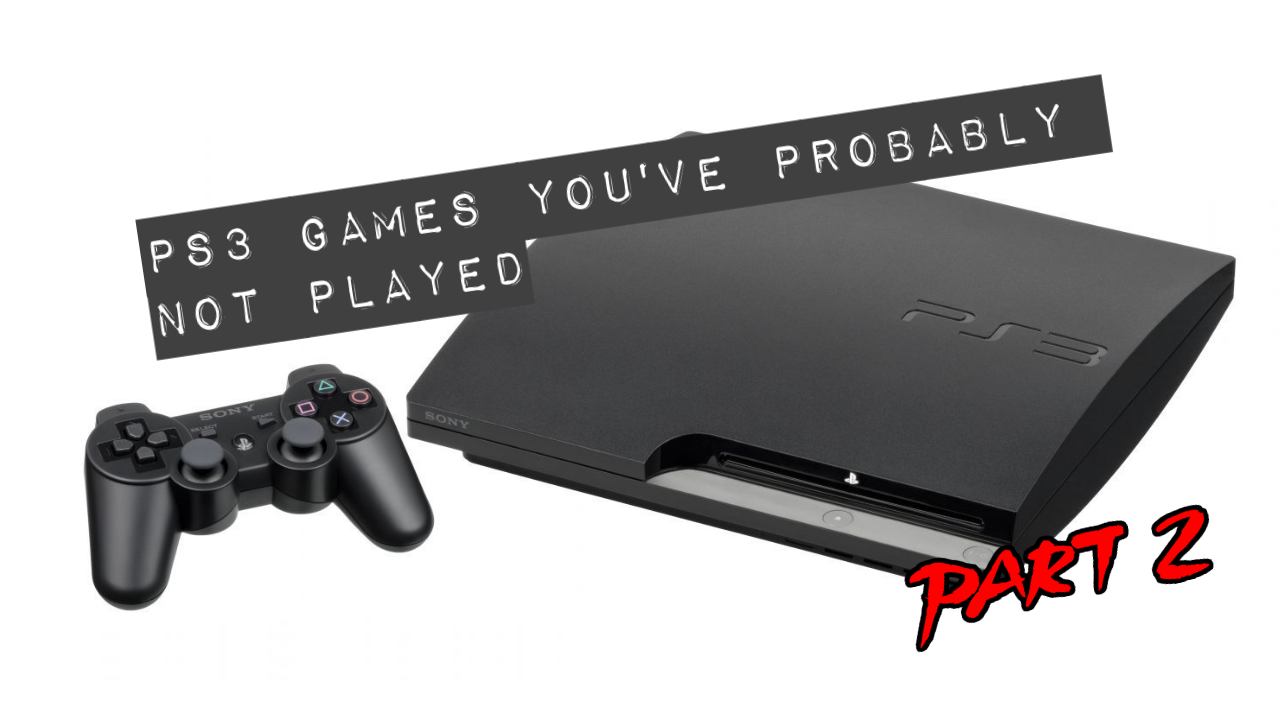 The PlayStation 3 has a lot of games that aren’t as well appreciated as they should be. You can find my first 10 PS3 hidden gems here. After reading this, I hope you’ll find a few more games to add to your PlayStation 3 games library.

Nier in an action role-playing game developed by the now defunct studio Cavia and published by Square Enix. In 2010, the game was released worldwide with a few small variations being made to the Japanese versions.

The game makes good use of traditional RPG, top-down and side-scrolling mechanics throughout the game’s story and while there are a few repetitive side-quests, the main story is very well written and has received praise from critics and players alike.

The game also requires 3 playthroughs to fully uncover the overarching plot. Besides that, the game’s soundtrack also made it to number 24 on the Japanese Oricon Music Charts and managed to stay in the charts for 11 weeks.

It’s really no surprise that Nier has become a cult classic. A sequel to the game, known as Nier: Automata, this time developed by Platinum Games, was recently released and has also been very well received. All the more reason to give Nier a try if you haven’t already.

Split/Second is a racing game developed by Black Rock Studios and published by Disney Interactive Studios. The game was released in 2010 and received many positive reviews.

The game places the player in a fictional reality television show called Split/Second, in which the participants race against each other while performing skids and jumps to fill up their powerplay meter, which can later be used to open up shortcuts or create obstacles for the other racers.

The game wasn’t meant to be anything close to a realistic driving simulation. It’s wild, quirky and often plays out like a Michael Bay movie. By that, I mean things explode.

Nearly everything can explode and land on top of your competitors if you so desire. Overall, it’s just an incredibly fun racing game. What makes it even better is the inclusion of an offline 2-player split-screen mode. Fun times await those who have yet to play Split/Second.

This game has probably been mentioned in every PlayStation 3 hidden gems list ever made so you know it’s a good one. Dragon’s Crown is a 2D side-scrolling action role-playing game developed by Vanillaware.

The game was published by Atlus in Japan and North America and by NIS America in Europe and Australia. A bit of a weird arrangement for publishers and regions but we’ll gloss over that because all you need to know is that this game is worth your money and time.

Dragon’s Crown is best known for its slightly ridiculous character designs and art style but beyond that, it’s actually a great game.

It’s set in the Kingdom of Hydeland. You might recognize the name if you’ve played Odin Sphere. It is in fact the same world, only at a different location and a different point in time. The player sets off on a journey to retrieve the Dragon’s Crown, battling many foes along the way, as you would expect, but it’s still quite a unique game in its own right. What else can I say? Try it!

The games were later released in the west in 2015 and 2016. These role-playing games are part of Nihon Falcom’s long running “The Legends of Heroes” series.

If you’re a JRPG fan and you haven’t played these games yet, you’re in for a treat.

Way of The Samurai 3 is an action role-playing game developed by Acquire, the same studio that gave us Tenchu and Class of Heroes. The game was originally released in Japan in 2008 and was later released in North America and Europe in late 2009 and early 2010 respectively.

The easiest way to describe the game to compare it to a more modern samurai game that almost everybody knows about, Nioh. Imagine if Nioh was a bit more sunny, quirky and was made almost 10 years ago.

Granted, that’s not a very accurate description but you get the idea. There are also branching paths to the game’s story, each leading to one of 28 possible endings. Yes, 28!

Way of The Samurai 3 initially received average review scores and has since been forgotten by most but the game itself can be quite an enjoyable experience especially for action RPG fans.

You can check out my fellow Bards trying to get through the first game in the Way of the Samurai series on our YouTube channel here!

In case you’re still unsure, yes, this is a movie licensed game based on that Disney movie about sentient automobiles. “Surely that can’t be any fun at all”, you might be thinking. Well, you would be wrong!

This game was developed by Avalanche Software and was released in June of 2011 in conjunction with the movie. While the movie only managed average review scores, the game did not disappoint.

The game itself is a well-made Kart-style racer featuring iconic characters and locations from the movie franchise and as a whole, it’s a very enjoyable game. Furthermore, the inclusion of 4-player cooperative play made me very happy.

Cars 2 is best experienced with a bunch of your mates but even playing alone can be quite fun. Certainly, a lot more fun than you would expect a movie tie-in game would be.

This one’s for the horror fans! I’m not a survival horror fan myself but I still have to mention this game. I’ve been told countless times by my more “fear-resistant” friends about how good this game is. “It’s a masterpiece!”, they said.

Now, after watching gameplay footage, reading reviews and figuring out what the game is actually like, I’m convinced that this game should not be ignored by anybody who enjoys survival horror games.

It was developed by Access Games, a studio which over the years has been involved in developing games such as Ace Combat X, Drakengard 3, Sengoku Basara and Devil May Cry 4: Special Edition.

The game initially received mixed reviews with some publications deeming it a masterpiece while others remaining adamant that it was utter crap. Deadly Premonition actually made it into the Guinness World Records book in 2012 as the “Most Critically Polarizing Survival Horror Game”. Years have passed and the game still has a strong cult following and is very well regarded among horror fans. If you like survival horror games, you’ll enjoy this one.

I don’t claim to be a huge Transformers fan but I did grow up watching a lot of the Transformers cartoons. I especially liked Beast Wars for some reason.

That said, Transformers: Fall of Cybertron brought back that feeling I had when I was a kid watching the cartoons. It was developed by High Moon Studios which would later work on Call of Duty: Infinite Warfare and Destiny.

There’s not much to say about this game, really. It’s what you would expect a good Transformers game to be. Fun combat, good story, well-designed levels and pretty visuals. I know the franchise has become a bit of a cash-cow in recent years but give this game a chance. I doubt you’ll regret it.

The game also features a few heavy metal musicians such as Ozzy Osbourne, Lita Ford, Rob Halford and the late Lemmy Kilmister and as you would expect, the soundtrack is incredible.

The gameplay is a mix of an action role-playing game and real-time strategy with a lot of heavy metal elements woven in. We don’t get many metal games but this is one that should be experienced by all heavy metal gamers.

Trust me, just “go off the rails on this crazy train.”

Wet is an action game through and through. The game was developed by Artificial Mind & Movement, now known as Behaviour Interactive and published by Bethesda.

The game was released in 2009 and received praise for its presentation and soundtrack. A sequel was planned to be released in 2010 but was later cancelled.

Wet puts the player in the shoes of Rubi as she seeks her revenge, which in any retro action flick means stylishly jumping through the air while shooting at people in slow motion.

This happens very many times throughout the course of the game. It’s a bit cheesy at times but ultimately, it’s a game that isn’t supposed to be taken seriously and is simply quite a bit of fun.

That’s the end of part 2! Did you find any more games you’d like to try? I hope so. I’ll have to do a part 3 later on but until then, enjoy!