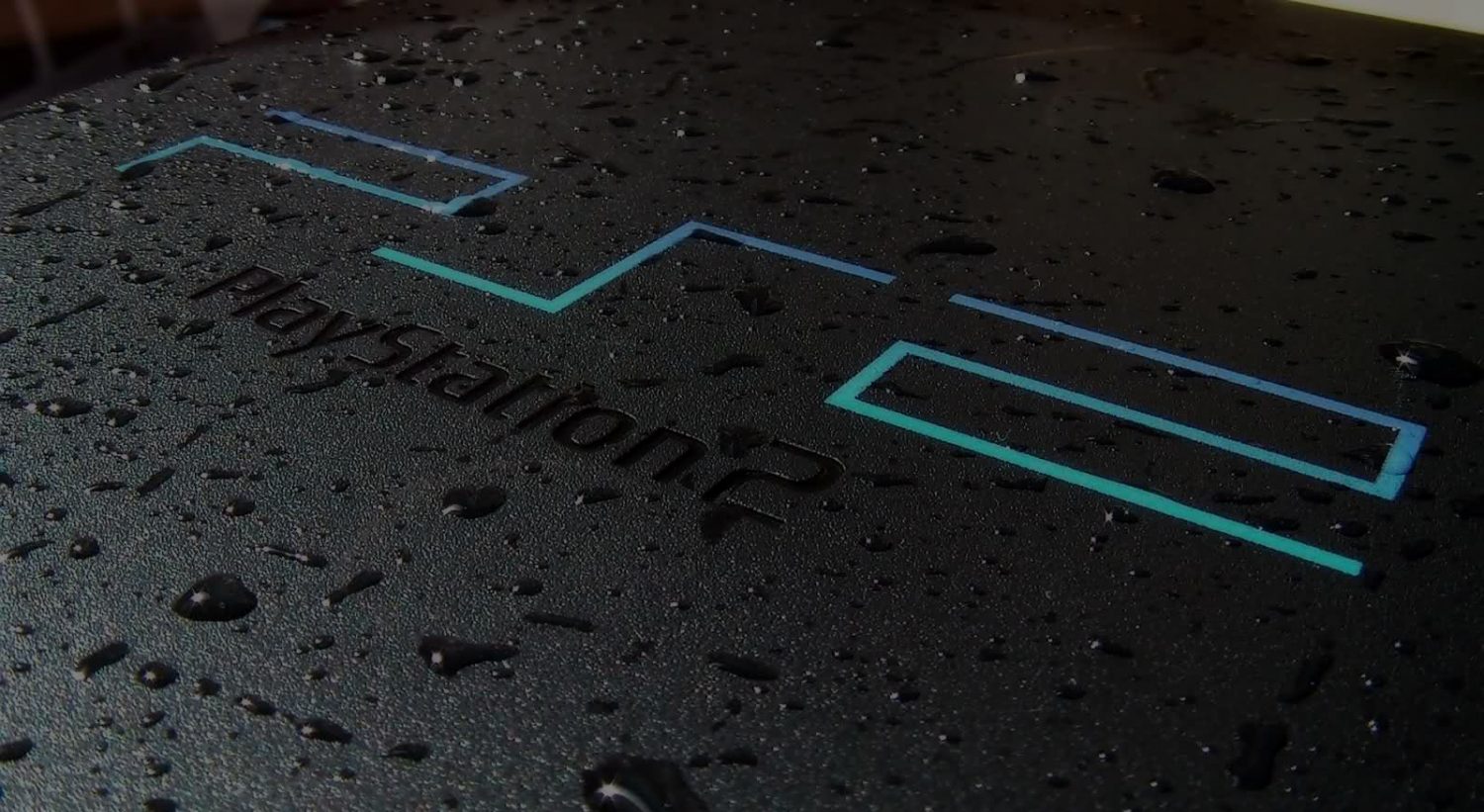 Sony’s PlayStation 2 is one of my favourite consoles ever. It’s vast library makes it one of the most desirable consoles too, but also makes it hard to know where to start. Following top 10 lists can lead to you spending hundreds of pounds on stellar titles and rare gems and that can prove frustratingly difficult on your bank account. Here is a guide to help you get off the ground for just under £100, as well as giving you some essential games and tips. All of these prices are taken from CEX’s website as of August 2016, and are completely subject to change.

That’s right, for under £30 you can get your grubby mitts on a slimline PlayStation 2 and a dualshock 2 wired controller. I’ve chosen the slim model, even though it’s slightly more expensive, due to the fact that I still have my original PS2 Slim that I’ve had for over ten years. The slim also has less breakable parts and runs a lot quieter than the ‘PS2 Fat’. A great feature of the PlayStation 2 is that it’s backwards compatible, so you’ll have access to the entire original PlayStation library – I’m just going to cover PS2 titles though.

The PS2 is often heralded as the last great local multiplayer home console. It’d be pretty stupid to just get the one controller, even though there are some fantastic RPG’s and single player titles among the console’s library. Most of the games on this list do feature split-screen elements, so if this is a joint effort for you, you won’t be disappointed.

Unlike most consoles of today, the PS2 didn’t have internal storage; this was a thorn in its side when faced with Microsoft’s Xbox, its closest competitor. Games were a lot smaller in size back in the early 21st century, so 8MB was a hell of a lot of space. I’ve managed to get through a collection of over 100 games with just three of these, and I still have some space left over.

One of the two most expensive titles on our little list, Hit & Run is a laugh in the face of those who put down Movie and TV licensed video games. It’s a game that never loses its charm through an open world, collectables and crazy unlockables. At its time it was heralded as a kids’ GTA, but it’s so much more than that. This isn’t just a must-have for a Simpson’s fan; it’s a must-have for anyone with a PS2.

Guitar Hero III is the game that really took the series to new heights. It introduced many people to Dragonforce and harder difficulty settings, and everyone and their cat had a copy. There was a huge assortment of tracks on Legends Of Rock, ranging from Iron Maiden to Rage Against The Machine to guitar battles with Slash & Tom Morello. This is THE music game to have on any console.

MK: Deception was a very interesting entry into the Mortal Kombat series, introducing an open-world RPG like story mode, titled Konquest. You travelled the realms as Shujinko, unlocking new character skins and unlockables along the way as you battle foes and learn all sorts of combos and fatalities. Combining this with an incredible two player versus mode is enough to warrant it a place among my top tier of games for the system, and in my opinion, it’s place as a must-have.

Somewhat of a hidden gem due to terrible reviews and an incredibly generic name, Beatdown: Fists of Vengeance is up there at the top of my PS2 favourites, alongside another title on this list. B: FOV is an open world brawler with a near-limitless plethora of unlockable characters and an insane amount of replay value. The game also has a two-player battle mode, but you need to play the single player to unlock more characters for it.

The Worm’s transition into the third dimension was a great one, and this specific title took up a lot of my childhood. Everything packed a much bigger punch in this instalment of the strategy franchise, and the banana bombs wreaked havoc among your enemies. This game is so silly, yet so satisfying, making it a must-own for any aspiring PS2 collector.

Quite possibly the best entry into the Hitman series ever, Blood Money had some really stupid missions, and hilarious AI. From dressing up as Santa to sniping clowns, this game has it all. Featuring memorable missions such as assassinating Skip Muldoon on a riverboat this is one of the most diverse and unintentionally hilarious games in the Hitman series, and quite possibly the best.

Everybody needs a sports title in their collection, and alongside SSX 3, this is mine. TS PS 3 is the best title in the Tony Hawk series by a long shot. There’s been many games since and there were many before, but Pro Skater 5 is just horrible and this is where they got the formula right. Featuring an exciting multiplayer option, this title is a gem. The character creator can be a laugh too, so be sure to spend a few hours on that.

Grand Theft Auto lacks explosions. It has some, but not in the way of Just Cause. Michael Bay’s Just Cause is crazy amounts of fun, using your grappling hook through the dense jungles of South America has never been rivalled, and the game went on to spawn two sequels. This is a game for the chaos-lover. Just Cause is a game that’ll leave your jaw on the ground and your balls in the air. It doesn’t make any sense whatsoever but it doesn’t matter. It’s so manly.

Choosing a favourite Dynasty Warriors game is like playing a game of spot the difference in a mirror. Dynasty Warriors 4 is my favourite because it’s the one I grew up with. It may just be the only series in which you can hit people with pillars and palm trees, and you can rack up a crazy kill count in a short amount of time. It’s an easy game, but it’s a lot of fun when done right.

One of the best fighting games on the planet, Soul Calibur II did for the PS2 what Tekken 3 did for the PS1. It smashed my face in. It’s the best PS2 game to feature Spawn and comes very close to being the best fighter on the system, if it weren’t for Mortal Kombat: Deception. The game features a dungeon-crawler game mode titled weapon master, which leads to some tricky fights affected by factors such as wind and starting with half health. The game presents a big challenge, but feels great if you can beat it.

The ultimate multiplayer experience. Timesplitters: Future Perfect may be on the more expensive side of this list but it belongs there. It only rose up in the past year or so and there’s constantly speculation and rumours surrounding a sequel, only to be shot down by company closures. To my knowledge, TS: FP is the only game that a zombie can chase a robot monkey through a disco whilst man-size humanoid gingerbread men follow suit throwing bricks. It’s crazy and lovable.

The iconic Grand Theft Auto title, GTA: San Andreas marks the moment Rockstar hit a gold mine. Vice City was fantastic but San Andreas was just huge, every character was memorable and the multiplayer mode was a blast. Samuel L. Jackson starred in this game, surely that’s all you need to know. You can run down civilians and blow up people’s cars with them inside. Unleash your inner criminal.

Quite possibly the best racing game of all time, regardless of console, Burnout 3: Takedown is a must-have for the system. The graphics are becoming dated but they still somehow manage to not be a detriment to the gameplay, unlike some other older classics. The game is intense and one hell of a thrill-ride, therefore you just have to pick this up.

It hasn’t been too long since the world had an entry to this franchise, so you may think you know what it’s like… you’re wrong. Battlefront II had a huge emphasis on teamwork, and had a brilliant game mode called ‘Galactic Conquest’ in which you try and take over or protect the entire galaxy from either the Sith or Jedi. There are gargantuan battles between Wookies, Ewoks and Stormtroopers on Tatooine and the Mos Eisley Cantina loops the band’s song. Playing as Yoda is hugely overpowered because he is impossible to hit. This is the iconic star wars game for any star wars fan. At just £10 it’s a steal.

So there we have it, how to get started on the PS2 for under £100. You best be on your way to the shop right now. Don’t pass on any of these titles as they’re all huge games that’ll keep you entertained for years on end. Let me know how you get on in the comments.