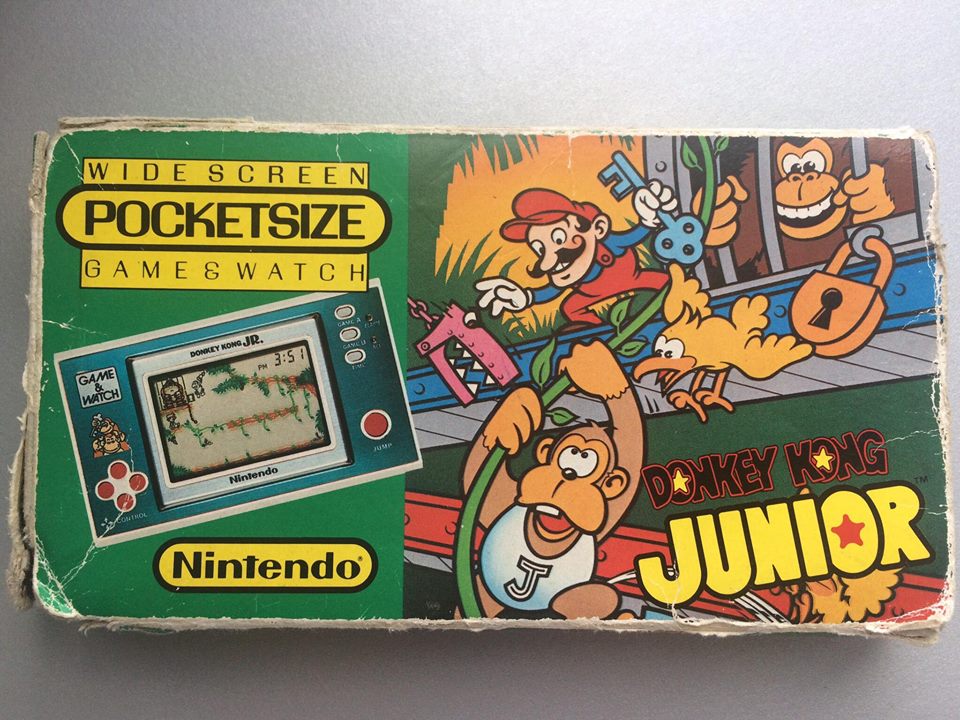 Greetings, gamer girls and boys! In this particular article I would like to tell you about something special. I’m talking about a rarity, an artifact from the past, a true gem and a real treat. Those of you who are a bit more gaming-history-savvy may suppose it is a port of the classic Donkey Kong Jr. arcade game from 1982 what I want to share with you. My grandfather bought this piece for my dad and uncle for a couple of bucks while visiting the United States in 1984. Today, however, it’s value reaches up to $200 (box included).

As it is the case with all the versions of this game, the plot is fairly simple for a Nintendo game from the 80s. You play as Donkey Kong’s young one and your only objective is to rescue the big DK from his captor Mario who put DK in the cage for kidnapping his girlfriend (but that’s a story for another day), while overcoming a series of obstacles.

There were actually three versions of the Game & Watch port made (all released in 1982). Those were the Tabletop, Panorama (fully colored, 250 000 copies manufactured), and the one, I happen to be such a lucky owner of, called New Wide Screen which differs a bit from the other two by being only black-and-white (with permanent colored environment, all the moving parts are just black, 1 000 000 copies manufactured). There are still several copies of this device (and both of the other versions) available on eBay. The prices for the antique alone range from around $50, the ones with the original box may be four times as expensive and there’s even a sealed copy that costs $900. However, the box I own is nowhere to be found. I assume that is because it is the best-looking one so they’re all sold out. Also unlike the game device, which was constructed in the 1982, the box says it wasn’t made until one year later, in 1983.

How does it actually play?

Now, let us get to the core gameplay, as this was the main reason it was so beloved by many. To its credit I must say after all these years it holds up really well.  So much so, I found myself procrastinating playing it instead of writing this article or doing other useful or productive stuff.

The controls are tight and responsive as it has become a norm with Nintendo games, over the decades. You control Donkey Kong Jr. with 4 directional buttons and a jump button. That’s all the tools you get.  There is just one level in the game. You have to get from the left side of the screen to the right, climb up the lianas, run to the left, to the edge of the platform where you are just one correctly timed jump away from grabbing a key from the cage, unlocking it, laughing Mario – who is sitting on a tree branch besides – in the face and jumping back down to repeat this process over and over to gain as many points as you can (all the way to 999 after which instance, the counter goes back to zero).

There will of course be enemies that will do their best to make your quest more complicated and challenging in form of living Snapjaws you can avoid by jumping over them, hit them with a piece of fruit you can pull off of a tree or climbing up a liana where you however face the risk of being hit by a beak of a hostile bird.

It actually takes only four key-grabs to unlock the cage completely which results in the daddy DK changing his sad face into a big smile but that’s all. End of the story, although the gameplay still goes on and after every cage-unlock the game gets progressively more difficult by adding more enemies on the screen. And of course you have 3 lives to waste before you fail and have to start all over again. The game has two difficulty modes: Game A (the easier one) and Game B (the harder one) with the only difference being that in the Game B you start off with more enemies.

In spite of the simplistic graphics the art style is quite pleasing for an eye and makes the game look clean. As for the sound, with no music there isn’t much to say about it, but it serves its function.

Of course, today’s handhelds are able to pull off much more complex worlds and mechanics (obviously), but it still manages to deliver a fast and addicting gameplay full of thrill. I simply had a blast! I give it 5 bananas out of 5.

Explore the annals of the gaming history!

If this article got you interested, I encourage you to do research on your own as you may find even more gold.

And if there is any morale to the story, it would be this: Don’t throw away old gaming stuff. It might have a surprisingly high value. (Spread the word.)

THE ULTIMATE PS2 BUYER'S GUIDE - GETTING STARTED FOR UNDER £100

Twisted Bard Gaming Podcast 18: What would be the perfect Mario animated movie?