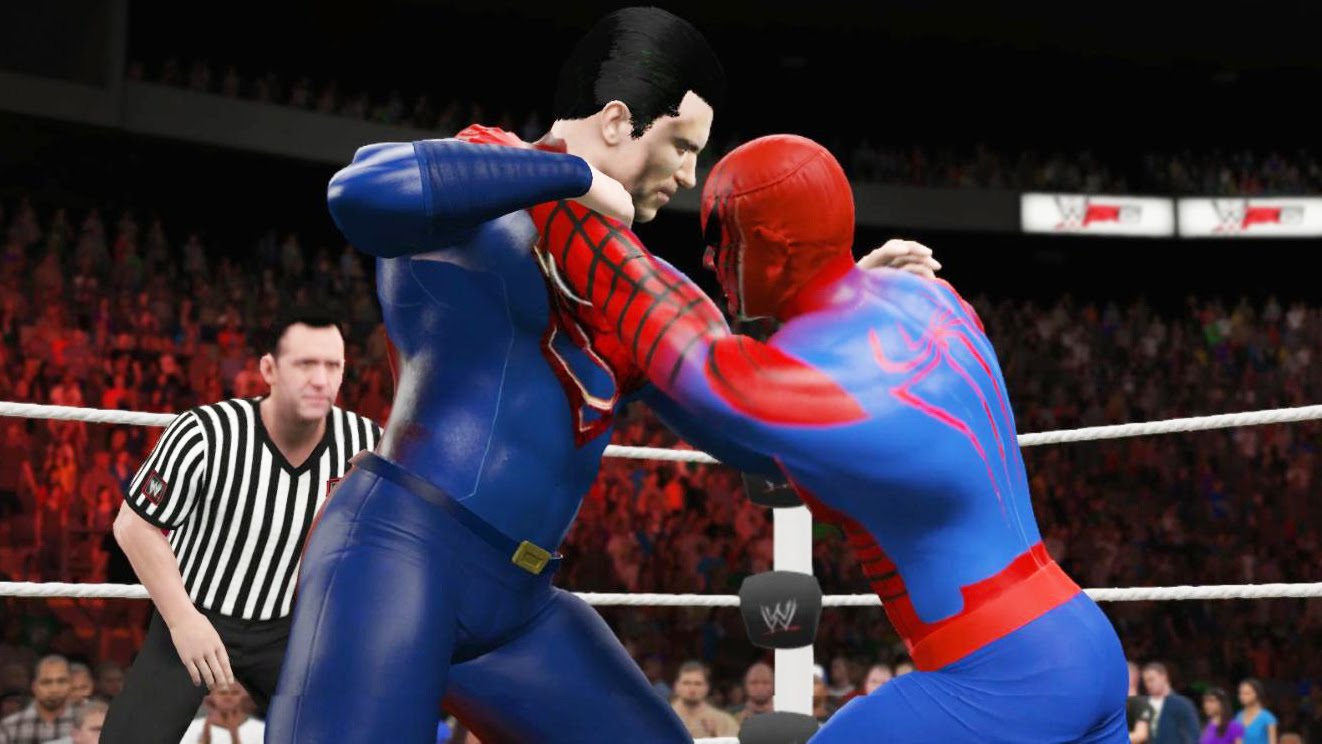 As the smoke clears from this year’s E3 event I can’t help but be excited for some of the superhero games on the horizon. Not only the complete shock announcement that there will be a new Spider-Man game but also that someday in the near future, those lucky enough to own VR headsets can become BATMAN! Since these announcements have me thinking about superhero games I thought it would be fun to think back on my top 10 superhero games. Let me just finish putting on my cape and pulling my underwear over the top of my trousers, now I’m ready so here we go.

10. Injustice: Gods amongst us

No longer will you argue with your friend about who would win in a fight Batman or Superman or what would happen if Batman went blow for blow with the joker? These questions can be answered simply by picking up your gamepads and going mano-a-mano or well alien-a-man dressed like a bat-o. This game incorporates all your favourite DC characters in a great fighting game featuring familiar environments and cool signature moves. Great fun to play Vs a friend or even against the AI, this one isn’t just for DC nerds, but it helps.

Fans of Marvel’s latest movie release, Captain America: Civil War will really enjoy the storyline and focus of this game which takes aspects from the Civil War story arc. With lots of familiar characters to play as this is a really fun action-RPG game. If you were split on who’s side you were on in the movie then this game will give you the chance to build your own team, they will fight for you and whatever you stand for. Unless you’re all about being evil and shit, superhero teams won’t stand for that.

Unfortunately released a couple of years too early before Ryan Reynolds brought the character to life and made the world fall in love with Deadpool. The game is pretty average as video games go but if you’re a fan of the film then this one is for you. Fourth walls are broken, Wolverine is mocked and the humour is well, it’s pretty vulgar. So perfect for those of you craving more Deadpool before the second movie hits the big screens.

Released on the wonderful PlayStation 2 console back in 2004 this is easily still one of the most violent games I’ve ever played. This game stays just as true to the Punisher character as you could get. The gruesome ways you can interrogate criminals to get your information is twisted and brilliant. If you like your games violent then this one is definitely for you, have I mentioned it was violent? It’s not a very complex game and will not hold your interest for too long, you may even be desensitised to its gruesomeness. If you fancy slowly putting someone in a woodchipper, shoving someone’s head down a toilet or shoving their face into a spinning aeroplane propeller well, this is the game for you. Also maybe try yoga or other relaxation techniques.

I’ve talked about this game before I know, I’m becoming Sam with his Naughty Bear obsession. If you take games too seriously well this one is not for you, in fact, this entire list is not going to be for you. Playing as everyone’s favourite sunlight loving vampire, you can hack, slash and shoot your way to save humans from torture at the hands of evil vampires. Vampires who wear suits and have even taken the time to name their evil plan, so you know they’re evil. Don’t believe all the hate this game gets, it’s bad yeah but in a loveable way.

One of the greatest games to make its way onto the Gamecube, Viewtiful Joe is not a familiar superhero. I’m not grasping at straws here, he has superpowers and it basically looks like a comic. The visuals in this game are beautiful, it’s like it leapt off the page of a comic book. Probably one of the few games on this list to actually be highly praised by critics, meaning if you haven’t played it why? Why haven’t you played it?

There have been hundreds of Spider-Man games and I’ve probably played 90% of them because, well, I’m a huge Spider-Nerd. Despite being a movie tie in this game was actually pretty great. It was one of the first Spidey games to be open world, revolutionising the way Spidey can get around. Games before this were not 3D, you could still swing but it looked and felt a bit rubbish. The latest Amazing Spider-Man games aren’t much of an improvement on this game, some slight improvements in graphics and physics but very little else. Let’s hope this new game is going to be one to remember.

Lego? Are you serious? How old are you? I imagine those are the questions you are asking if you’re reading this. Turns out Lego knows how to make games for fans. Not only are they fun to play but they are full of easter eggs, inside jokes and great character interactions that will entertain Marvel fans. I actually love the physics of Lego Spider-Man and how he moves in this game, it’s pretty spot on. The Lego Batman games play a similar homage to fans of the Dark Knight, especially as non-Lego Batman games take the character really seriously. So these games are definitely aimed at a much younger audience and are not going to pose much of a challenge so maybe play them with your Son, Daughter, younger siblings, Niece, Nephew or Grandkids. Just play this game!

The oldest game on this list by quite a margin released in 1992 on the fantastic SNES console and second on my list is Turtles in Time. At the time of release the Ninja Turtles were huge, I mean this in the sense they were really popular but compared to normal turtles they were also large in size. Two successful movies, a great animated series, and the action figures were the most desired in the world (I should know, I desired and owned them all). I could talk about the Ninja Turtles all day so let’s just focus on this game. An arcade style, side scrolling beat em up is the best way to describe it, the game looked and played great. Sticking to the style of the animated series, the Turtles looked right out of the cartoon. Taking control of your favourite Turtle with your buddies at your side you set off to beat Shredder and his dreaded foot soldiers. What more could you have wanted?

Superman 64: Listed by many as the worst game of all time, need I say anymore.

Catwoman: Should we have expected a decent game based on that movie? I’m gonna say we are all at fault for this one.

The Incredible Hulk: Again, I’m not sure what I was expecting but this is just awful. Bad Hulk! Bad, bad Hulk.

Men In Black: The Video Game; Ok so not exactly a superhero game but I just wanted an excuse to trash it. I rented this game and returned it the same evening. What an awful, awful game. I’ll never get that time back, ever!

Basically, I couldn’t pick a favourite. Asylum was excellent and really changed the superhero genre of video games. City improved on Asylum with a great storyline and an open style world. Then Arkham Knight had all the great parts of previous titles plus the Batmobile!!!! Rocksteady really made a name for themselves when Asylum was created because for the first time in a long time it was a game based on a superhero that non-superfans could enjoy. Critics have praised the Arkham games and it’s not surprising to see why. For serious gamers, the story mode can be completed fairly quickly but the side missions and DLC’s can keep game time going for much longer. Arkham Knight has you chasing after over 240 Riddler trophies and that isn’t done in one night. If you have put off playing any of these games, for fear of them being campy and for Bat-Nerds only, you need not fear. Both Arkham Asylum and Arkham City will be getting re-releases for next generation consoles sometime in the near future, though I believe they have just been delayed. Go now, become the protector of Gotham, scourge of the underworld and guardian of the night. Don the cape, the cowl, and step into the world of the Dark Knight.

The Problem With Games

Nintendo NX what we know…So far

5 Non-Sports games to get you off the couch

Man Vs Snake: The Long Twisted Tale of Nibbler – Review

Return of the Crash