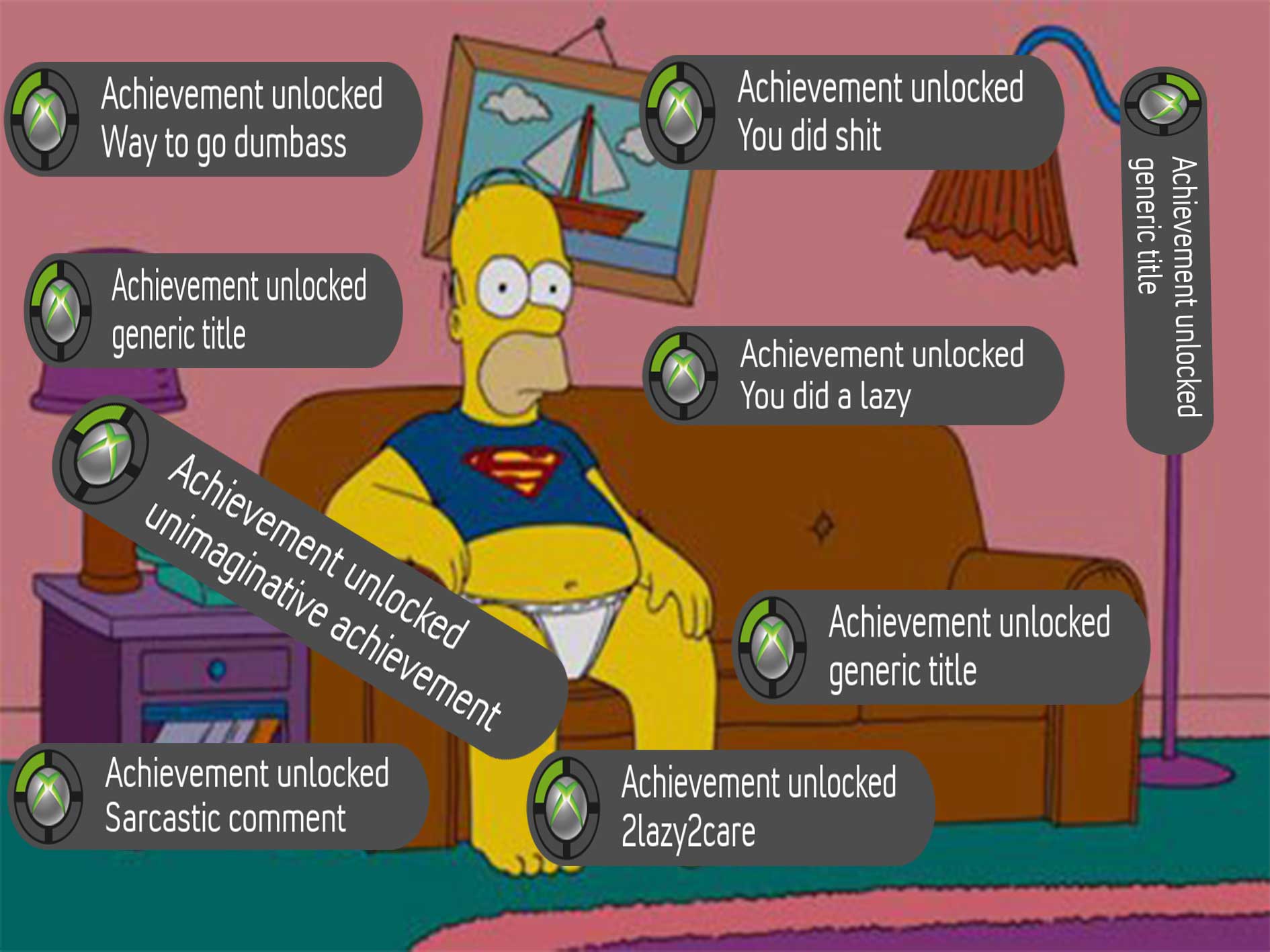 We’ve all seen the hundreds of ‘Easiest gaming achievements’ lists. They give you a brief run down of the simplest achievements to get and the best games to 100%. I absolutely love these lists; in fact I’m currently working my way through one.

However, as I was sitting there into my second hour of Cubot: The Complexity, I realised that grinding through each puzzle and every level was a rather slow way to get my 1000G. An easy achievement is one that is obtained with no difficulty; it can be long and monotonous but not too challenging.

On the other hand, a lazy achievement is one that is obtained with minimal time and effort. I love achievements, but hate having to grind through to get them, and don’t get me started on Titanfall 2’s “Become the Master” achievement.

Multiple controllers have been lost to unfortunate and unforeseen accidents. As a result of my laziness and need for those G’s, I have gone on a mission to find the easiest and laziest Xbox achievements for gamers like me. You know, those who care too much about something that carries no actual value – just like supporting a sports team.

Many of these achievements share a similar strenuous task that must be completed in order to get that sweet sweet G. Sit back, put on Chemical Brother’s ‘Galvanise’, and watch the achievements pop:

The Simpsons: Press Start to Play (5G) – Does what it says on the tin, press start and quit the game after raking in 5 precious G.

Slice Zombies For Kinect- Welcome (10G): guess they felt sorry for you buying the game

Transformers: The Game- Transform and Roll Out (10G): a sneaky change to the system, press Y instead of start.

Roblox – Scout (10G): is once again for “trying a game” This game has one of the laziest achievements and one that requires 20 days of dedication. Not worth the trade off for a lazy 10G.

The rest of these games require you to use a basic mechanic or complete a simple task, but you tell your friends how difficult it was. I’ll label these as:

6180 The Moon – Gravity Free (40G), Still Alive (40G), and Start the Journey (50G): This game can be completed in a matter of hours, but only minutes are required to unlock 3 pretty lazy achievements. Gravity Free (40G) this can be done in the second mission and is for finishing the level without jumping, so just hold the joystick right and boom 40 G), Still Alive (40G) just requires you to let senior sphere warp from the top of the screen to the bottom 10 times, so basically fall off the first ledge and put the controller down. Start the Journey (50G) is obtained by proxy of completing the other two achievements, so no work required there.

Avatar: The Burning Earth- All achievements (1000G): As soon as you load up the game head into a corner and used your ranged attack to get 1000G in about 90 seconds. Put on the kettle, tap the B button and by the time the kettle boils you’ll have 1000G and a cup of tea.

Prince of Persia: The Forgotten Sands- Our little secret (5G): Lower the difficulty of your game to medium when setting up the game then as soon as you play, press start and change it to easy. Is 5G worth getting mocked by the game? Most definitely, my dignity went out the window when getting the achievements from this lis.

The Park – Welcome to the Park (50G), The Mist (100G): The Park is a hilarious excuse for a horror game. If you want an easy 1000G look no further than this 45 minute walkthrough, literally… walk through. The game is as slow as me trying to come up with a metaphor for how slow this game is. But Welcome to the Park (50G) and The Mist (100G) are obtained for entering the Park and for turning around at the beginning of the game and walking into the mist.

Fibbage: The Hilarious Bluffing Party Game – It’s Okay to Ask For Help (50G):  This is a great game so all the achievements seem easy as you want to play it over and over. But the It’s Okay To Ask For Help (50G) achievement takes the cake for lazy, all you need to do is click the “lie for me” button. The game gives you an achievement for being too lazy to lie. It’s like me getting money for ordering a pizza, here’s a reward for being lazy.

Three Fourths Home: Extended Addition – Until Next Time (125G) and Three Times Around (75G): Another ‘do nothing’ achievement and this time you get a 2 for 1 deal in laziness. We’ve all skipped cutscenes and dialogue as we can’t be arsed to sit through an extra minute of talk, and this game gives you 200G for skipping the opening dialogue and walking to the right to catch a bus.

Dead or Alive 5 – On the Edge of Your Seat (10G): this even removes the element of playing the game for achievements. This 10G goldmine requires you to watch a fight in spectator mode, simple as that, you don’t even need to watch all the fight.

Quiplash – Give It The Fingers (50G): just give both your quips during a round. It doesn’t even need to be a word, just put 2 letters as your answers or any word and you get 50G. Let’s not get overly lazy…writing is not that difficult

­So there you have it, 1710G for doing bugger all. Most of these games are pretty cheap so if you are super desperate for nearly 2000G to rub in a friend’s face or simply to make yourself feel better about not achieving in life then this list should take you a most 2 hours. Luckily most of these lazy achievements are attached to easy achievement games, so go nuts and gather those Gs like a squirrel preparing for winter.

Did I miss any lazy achievements? What achievements gave you a sense of shame for how little you had to do? We don’t judge at Twisted Bard. In the spirit of Achievements…