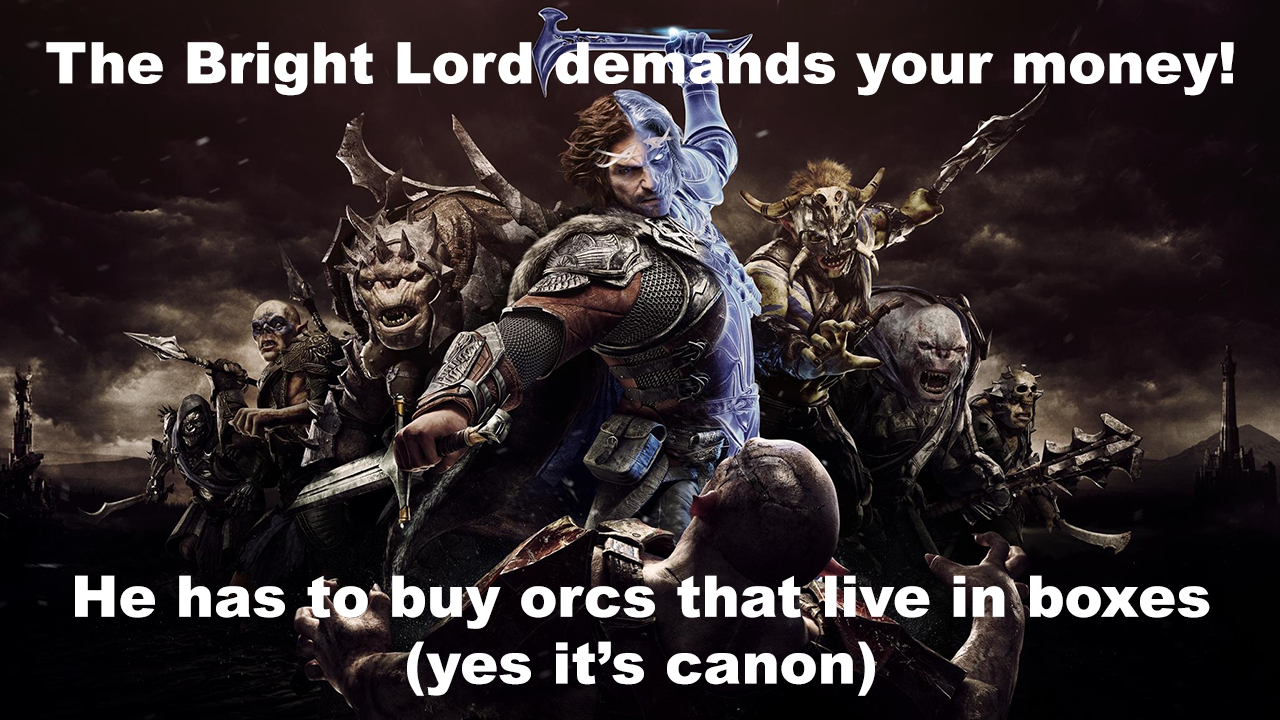 All the gaming world seems to be talking about right now is loot boxes and microtransactions.

Middle Earth: Shadow of War decided to destroy of all the good will the first game created by letting you spend real money to buy friendly orcs… yes, that’s a real sentence that gaming in 2017 allows you to write, and now it looks like Star Wars Battlefront 2 is going to suffer the same fate.

In fact, it seems like every time you turn your back on a game these days it starts trying to figure out new and exciting ways to get you to give up more of your hard earned cash.

While you have to give publishers credit for the creative ways they have found to inject a mainline straight into people’s bank accounts, is this really the best they can do?

I get it, they have to make as much money as possible because games are expensive, most of these big publishers have share holders they need to keep happy and hey, all those Jet Skis aren’t going to pay for themselves now are they?

What completely baffles me is that there are seemingly much easier ways to get people to spend more of their money that don’t create a firestorm and negatively impact the perception of a game.

Loot boxes and making changes that are obviously geared towards making more money (looking at you Destiny 2) is such a weird move that you have to wonder how desperately cold and lonely it must be to work in Activision’s PR department.

I can picture it, every time the PR team say, “I really think that our audience is going to hate this” everyone laughs and goes back to lighting unfathomably long cigars with the burning $100 bills they make off gamers buying fake money with their real life money… This is so confusing.

When the fun stops, stop

Helpfully, the main video game rating boards PEGI and the ESRB have said that loot boxes aren’t gambling because you are always guaranteed to get something for your money… problem solved right?

Except of course, people do mind and how do they respond? By spending as much real money as it takes for them to get everything they want. Now I know that not everyone will make that kind of financial commitment, but publishers are counting on the few people who will drop huge amounts of cash to keep coming back. Which, by the way, is also how gambling organisations operate.

And then of course there is the latest trend of douchbagery sweeping the AAA space, which honestly makes no sense to me at all: making people pay to speed up a game.

Shadow of War and NBA 2K18 are two games that immediately spring to mind as being guilty of this.

In the case of Shadow of War, the developers have stated that the game was tested to be fun without any purchased upgrades, but there is nothing to stop developers slowing down your progress to the point where buying your way through it becomes almost necessary, which appears to be exactly what NBA 2K18 is doing.

An even playing field

There is of course a perfectly simple solution to this loot box business: give people a big marketplace where they can pick and choose cosmetic items and buy them either with XP or with real world money. Tier them up so the fanciest items cost the most, do whatever you want with the pricing, it doesn’t matter if people know exactly what they are paying for.

Of course that means that people will just buy the things they want and not spend and spend and spend in the hope that a box that can be programmed to do whatever the people after your money want it to do, will give them what they are after.

The speeding up games issue is more complicated but can we just not? I mean seriously! Can we just not go down a path where players feel the need to spend their money just to finish the game they already spent their money on? This really shouldn’t be a thing.

To me this seems like a perfectly sensible approach that doesn’t exploit gamers who just want to enjoy their game. But then again, it’s an approach that is going to seriously impact the Jet Ski budget, so maybe not.

Twisted Bard Gaming Podcast 17: What should the next Star Wars game be?