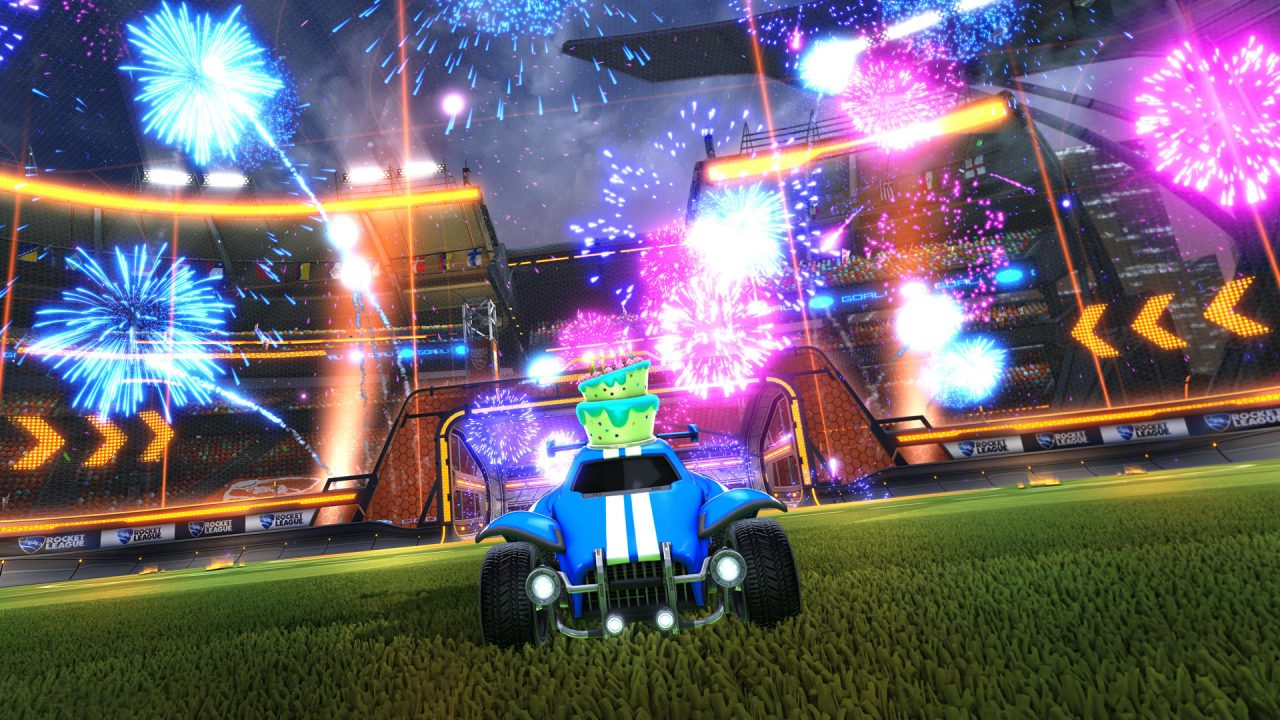 Rocket League is a game that is easy to play but hard to master. Many of the pros have thousands of hours in the game. For someone who is just jumping in or has been playing for a while and just wants to be better, watching the pros could be very intimidating. It may feel like you will never even be close to that level. However, with a  little bit of practice and a little bit of determination I believe many people can be quite good at rocket league. That is why I have compiled a list of 10 tips that will make you a better rocket league player. This is by no means a comprehensive list of all the tips that will make you good at Rocket League. It is a very extensive game even for how simple it seems. These are simply some of my own personal Rocket League tips to help you up your game.

I repeat DO NOT BALL CHASE. When you are new to the game it may sound like a crazy concept that you shouldn’t always drive towards the ball every second and you shouldn’t always hit the ball every time you can. There is many times where you should simply defend rather than try and hit the ball. There are also times where you should be there for the pass or be there as backup when your teammates are pressuring the ball. It is important to know that you do not always have to be going after the ball. This will make you a better defender, attacker, and a much better teammate (ball chasers always run into their own team).

Aerials are an important aspect in Rocket League. Early on it may seem like you need to aerial for only a few balls a game. But as you get better and progress in the game, you will realize that if the ball is in the air and you can get their first, you should almost always be in the air. At a higher level most of the game feels like it is played in the air. If you practice going up for aerials early on, when the game develops to where most of the balls are in the air, you will be ready.

When I started playing rocket league there was only three training Levels: Beginner, Intermediate, and Advanced. These trainings were vital to teaching me the very basics of the game. Now there are hundreds if not thousands of custom training levels available. These will help you practice shots, saves, and aerials so that you can better hit them in game. However, do not become dependent on the them. The shots that you hit in these training levels will rarely happen the same way in game as they do in the training. You simply need to take what you learned in the training levels and apply that to the game.

It is also important that you turn camera shake off. This will make the game run smoother but also will not jar you as much when getting bumped or when someone gets demo’d. The second setting that I believe you should change is your air roll button. This is a button that many people may have completely missed if you did not do the training. When you are in the air the default air roll button x on Xbox one or Square on PS4 will allow you to roll left or right. However, this makes it hard to boost and air roll at the same time which becomes vital for aerials. If you move air roll to Left Bumper instead, you can boost and air roll. Many people have different ideas for what air roll should be so, if you are curios you could look up what other players use.

This one feels like it should be higher up on the list because it is a very important one. If you are too focused on getting better and ranking up you will get very frustrated at the game. Yes, your teammates will be awful. Yes, you will play smurfs. Yes, Psyonix’s servers will be dreadful. But, this game is all about having fun. If you remember that and forget about the pressure of ranking up, you will have a lot more fun and will get better at the game. Getting frustrated doesn’t make Rocket League fun and it does not make you any better at the game.

This is advice that another streamer game me. If you see yourself judging your teammates for stupid mistakes that they are making and saves that they are missing, watch your replays. It will be eye opening to see all the dumb mistakes that you are making. This is a good way to see where your game needs improvement and try and get better at it. It will let you see saves that you could have made and balls that you should have hit. It will also make your teammates not seem so bad after all!

When I say watch other people play I am not talking about people worse then you or the same level as you. I am talking about people better then you at the game. However, if you are bronze or silver ranked, watching Grand Champs will not help you too much either. There are plenty of people on Twitch who are in the middle ground and are willing to help beginners learn the game. You will see a lot of streamers in the Plat to Diamond range that give helpful tips and will walk you through what they did wrong and how you can get better at the game. This will also show you techniques that you may not have thought about. You will see other ways to dribble the ball, how to air dribble, and specific skills like half-flips. It will also allow you to be a part of the wonderful rocket league community!

Similar to my original point of don’t ball chase, it is important to realize that positioning is everything. Regardless of how good you are skill wise, if you are not in the right place on the pitch, you will not score any goals and you will not get any saves. It is important to realize when you should push forward and when you should stay back. The only way to learn this is to practice and realize when you should have stayed back but you were forward. A good way to see if your positioning in games is currently bad is if you get scored on a lot with open goals. This is only caused by when all players are out of position. If your teammate loses the ball and they score on an open net, you were probably pushed too far up. If your teammate passes the ball right in front of the goal and you were sitting in your own net, you were probably being too defensive. You cannot be perfect every time though. You will get scored on with no defender and you will miss great passes, it is all a part of the game. Side note: you cannot count on your teamtes to have great positioning either. This is something that takes a lot of time and a lot of players simply never learn positioning. Do not count on your teammates to be there for saves or to hit in all your passes.

In my opinion this is what sets apart a good player from a great player. Most people in the game can hit open shots and make saves but it is a great player that can turn a 1v1 into a goal 90% of the time. Or better yet they turn a 1v2 into a possible goal scoring opportunity. You will love your teammates who can dribble the ball. The only way to get good at this is play 1v1’s… a lot. If your strongest game mode is 1v1’s you will be a great player. Dribbling will help in 1v1’s, 2v2’s and 3v3’s. It is also equally important to practice all your skills in every game mode. It will make a you a well-rounded player who is not just good at one game mode but is a good rocket league player in general.

This is the tip that made me go from a Challenger Elite in Season 2 and 3 to a Super Star in 1v1’s. It is also what helped me eventually climb my way into Champion in Season 4. If you always play the game safe you will never get any better. One of the pros that I regularly watch by the name of SquishyMuffins gave advice in one of his videos about not worrying about your rank and trying to hit every shot you can. This is really solid advice. If you practice taking shots that you do not think you are able to make, eventually you will be able to make them. This tip does come with the warning that you will miss shots that will lead to open goals and you will miss shots that will cause your teammates to be mad. But, if you live by this rule you will become a better rocket league player.