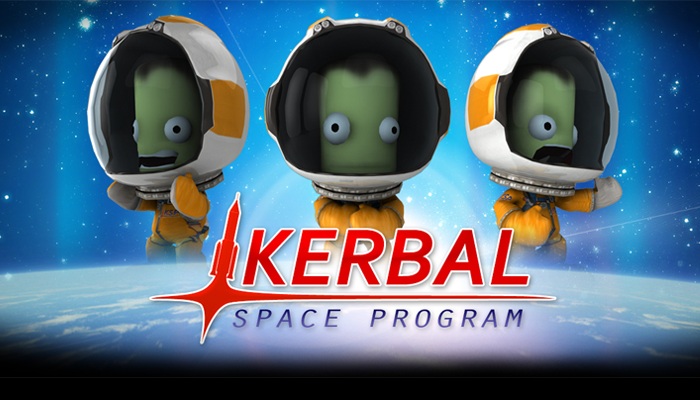 I’d like to think that gaming has taught me a few things in my short but colourful life, but none quite so much as Squad studios debut outing with Kerbal Space Program (KSP). This game wants you to apply science to achieve your goal, if you succeed you get more science to science with, and if you fail then you obviously didn’t science well enough so you’ve got to rethink your science so you can get some more of that sweet sweet science… makes perfect sense right?

KSP gives you something you never knew you wanted out of a video game, the chance to build and manage your own space program! Set in a parallel but not quite equal version of our solar system, you manage ‘Kerbals’, little lemming like creatures who reside on the planet ‘Kerbin’. Starting out with junk single fire rockets and single seater cockpits you’re challenged to lead Kerbal-kind out into the stars.

To do this you’ll need to plan missions to achieve goals that have not yet been realized by the Kerbin’s, the major part of this planning process comes in when you’re constructing rockets & spaceships. KSP provides you a well formed vehicle assembly bay, which gives you a simple to use interface to design different spacecraft but with advanced enough features for those players who really like to dig into the detail of their designs (aerodynamics, center of thrust, center of mass etc). Each spacecraft you make will need be staged as per your design, which allows you to create an effective launch staging process of jettisoning used fuel booster rockets and switching to less powerful orbital effective engines in effort to save weight and get you out of the gravitational pull of the planet in the most fuel efficient way possible.

Space flight is a dangerous venture, and you’re going to have to make some wee little baby steps before you’re blasting around exploring other worlds, setting up lunar bases and space stations. Your first mission sees you simply trying to build a spacecraft that can take off from the ground and make a safe parachute landing (preferably without exploding the brave Kerbal you’ve crammed inside!). Providing all goes well you’ll be rewarded with ‘Science’ which allows you to research new technologies such as better rockets, bigger fuel tanks or communications equipment. You also earn money for your achievements, which can be used to upgrade your facilities or fund your next mission. There’s a satisfying road of progression through Kerbal Space Programs career mode, from your first orbit of Kerbin to your first lunar landing on the Mun. The game drip feeds more elements you need to learn in order to achieve each mission but refuses to hold your hand through the learning curve and that’s something I really appreciate.

The Kerbals are endearing little creatures and totally add to the games tongue-in-cheek vibe, but that doesn’t mean that this game doesn’t take itself seriously. The physics engine and gameplay are the real selling point to this game, literally NASA approved, and although not completely 100% accurate to real life it’s close enough that you find yourself learning in way that parallels humans journey into the big black up top. Your first rockets are likely to resemble the Apollo/Saturn space programs designs, big single shaft simple style rockets built to blast up into space, break apart completely throughout the launch process and fall to ground as a little lightweight pod. But eventually you’ll need to work out effective heat shielding and re-entry efficiencies that will morph your designs to something akin to the space shuttle program. It’s all very clever and Squad studios clearly appreciate the significance that the various space programs have on humanities scientific development and the challenges that had to be overcome to see them succeed in the way they did.

This game isn’t winning any awards for the way it looks, but that doesn’t mean it’s not a visually pleasing game. Kerbal Space Program’s visual breadth comes from its feeling of accomplishment, I will always remember my first fly-by past ‘Duna’, a planet that if you stuck it into any other space sim game wouldn’t be anything special by any means. But the work effort and trial and error required from the player to reach it in KSP means that when you eventually fly past it for the first time, you can’t help but take a moment to look over at the planet and bask in the artificial sunlight that’s reflecting from its surface before casting your mind on how to get your Kerbal astronaut safely home.

The sound design is subtle but effective, with satisfying audio effects that capture both the power of 8 fully fuelled rocket boosters blasting simultaneously and the more delicate sounds of the reaction control system as you adjust your vessels alignment in the vacuum of space. The dynamic transitional background music gives the player a sense of progression through each major stage of a mission, whilst also being elusive enough to not become a distraction from the task at hand, an effect that totally works within the framework of a simulation/management game.

The future also looks bright for Kerbal Space Program, starting back in 2011 as an early access game. Kerbal Space Program has since 2015 been a full release game on all major platforms (PC/PS4/XBOX ONE/WII U), and the developers have recently released version 1.2 which introduced a bunch new communications equipment and features. This alongside a thriving and passionate modding community is really going to give KSP its longevity that its well-conceived game design thoroughly warrants.

I’d recommend this game to almost everybody, the only caveat I’d put on is that to succeed in Kerbal Space Program you will need a fair level of patience. If you’re all about smashing up your dopamine levels with hardcore fast paced FPS action and anything slower than that is not a real game, then KSP isn’t for you. But if you’ve got the patience and the willingness to apply yourself to active problem solving to achieve a seemingly impossible task then this game will suck up so many hours it’s really worth the investment, and you never know you might actually learn some of that sweet juicy science along the way.