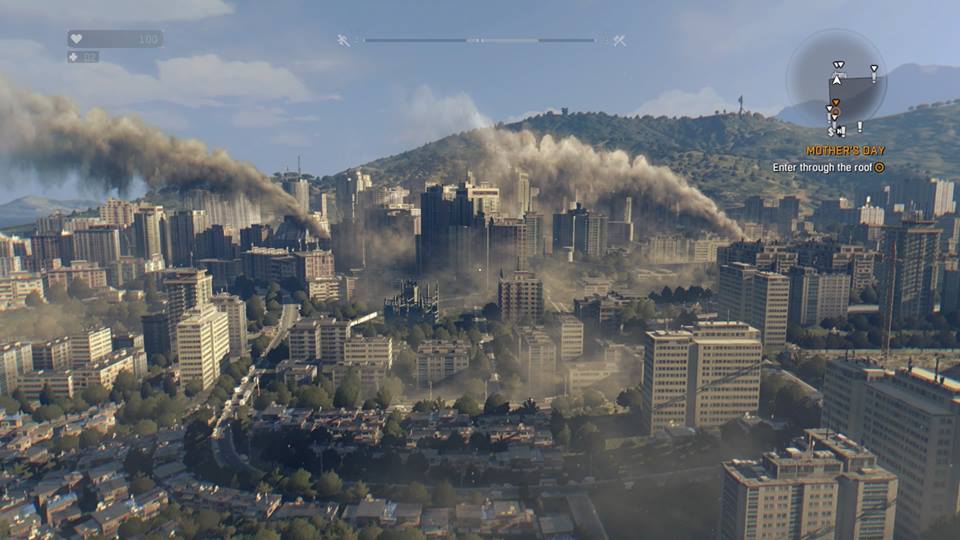 Things that go bump in the night

I will start by saying please do not judge me for what I am about to say: a good old zombie game is actually quite comforting. You know where you are with them, that being knee-deep in brains listening to the shuffling footsteps of those wanting to join the pile of bodies at your feet. Strangely, there is something safe about them. There are very rarely any twists in the plott line  and it’s all very straightforward, almost like settling back to read a book you’ve read on numerous occasions. Enter Dying Light, the zombie parkour amalgamation from developer Techland which is a bit like Dead Island had a bite of Mirrors Edge.

Right off the bat I will come out and say this game is a lot of fun. The daytime hours are actually quite peaceful. You will vault, jump and climb around the city picking up collectables and other such useful items avoiding the slow-moving hoard below all the while listening to the not unpleasant drone of the synth music that reminds me a little of the Blade Runner soundtrack. This part of the game provides so much entertainment that you pretty much forget about the main storyline which, let’s face it, is the case with most sandbox games. There is the obligatory tutorial section, but the backdrop of this is good enough to get you past the tedium and then you are free to explore the city. There are of course massive call backs to Dead Island which is to be expected given that Dying Light has the same developers. This can be seen with item degradation as well as being able to combine weapons with elemental damage, like electricity. You can also craft consumables such as throwing stars – that’s right…throwing stars. So there I am running across roof tops throwing my stars. I am a ninja – then I get to the first night-time sequence.

This is where the game really starts to come into its own. There are super zombies who are faster and stronger than you, making you slip from rooftops and run into walls in a blind panic. You have the light of a flashlight to guide you and what with the camera being thrown around in your haste to get away, visibility is poor. This, however, all adds to the sense of realism. I am pretty certain in the event of a zombie apocalypse I would miss a few jumps and run into dead ends, only to be eaten horribly. It makes the stakes a lot higher and the fear all the more real. The heightened danger is coupled with bigger rewards, meaning if you brave the darkness you level up a lot quicker. Suffice to say I ran as fast as I could and hid in a corner until daylight. All this is centred around the story which is your usual corrupt humans juxtaposed against the mindless cannibalism of the zombies. I’m sure there is some higher meaning about who is the real monster in this situation…but all I wanted to do was bash some skulls in.

Dying Light is an enjoyable way to spend a few hours especially with a few friends to help wade through the gore. It combines the two elements of parkour and first person melee extremely well; the added difficulty of the ticking clock counting down until night will keep you occupied for a while. I would recommend it to anyone who is a fan of Dead Island and games of that ilk. It’s a win if you like giving things a good kicking.