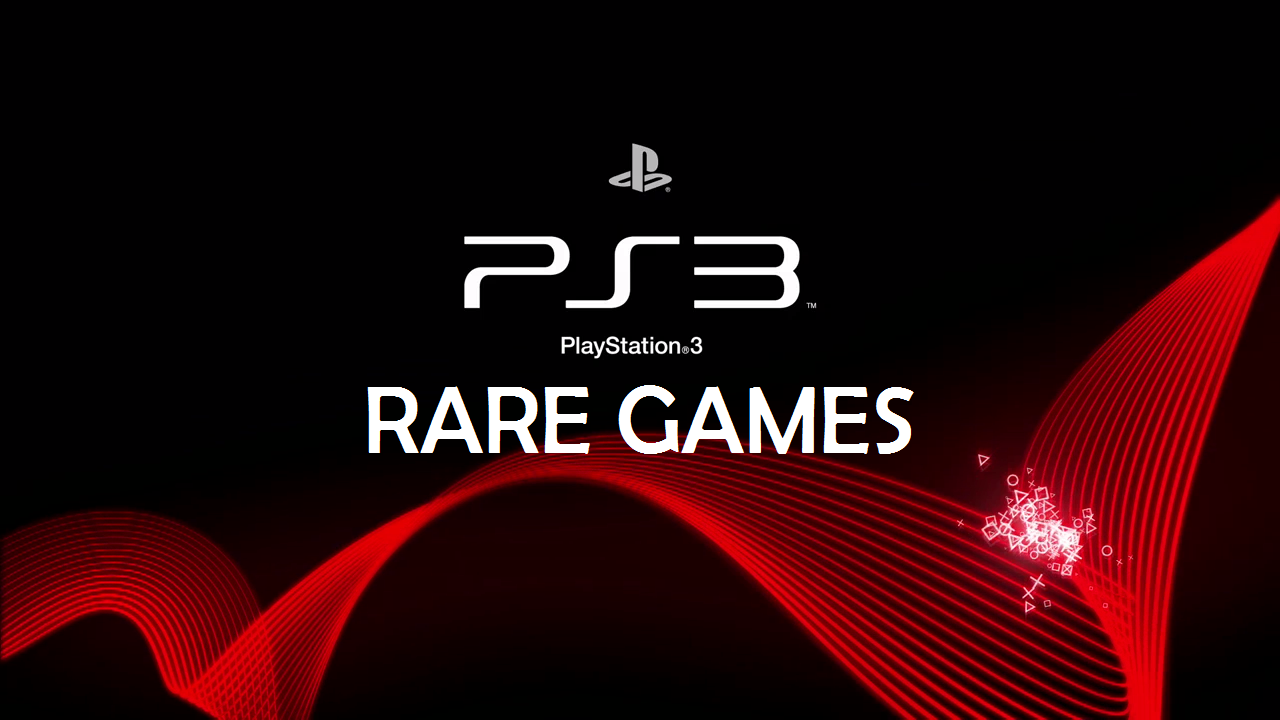 The PlayStation 3 is a relatively new console so there isn’t a lot of information regarding rare games on the system. Most of the lists I’ve found just annoyed me because they included special editions which were meant to be limited releases in the first place. So I took it upon myself to do some digging and I came up with my own list. Now, I’m not only going to list down a few rare games but I’m also going to tell you why they’re rare. I’ve also had to split this list into 3 parts as it was getting a bit too hard to efficiently fit everything into one article.

Just to be absolutely clear, digital copies, greatest hits, or “Best of” versions of any of these games don’t count as they aren’t in low supply. This list will also not include any special editions, limited editions, collector’s editions, press kits or anything which was ever meant to be a “limited” release. These are just standard “black label” physical releases of games which exist in low quantities. Furthermore, all the games listed are playable in English.

Now that I’ve gotten that out of the way, here are the first 5 entries from my list of 15 rare and potentially expensive games on the PlayStation 3. I’ll also leave a short list of 5 currently not-so-common games which you might want to look into, at the end of the article.

Afrika is game that’s relatively well known for being quite rare. It’s a PlayStation 3 exclusive title developed by Rhino Studios. A trailer for the game was revealed at E3 2006. The game was released exclusively in Japan as “Afrika” in August 2008. It wasn’t until an entire year later that the game was released outside of Japan. Afrika retained its name for its North American release, however, in Korea, it was renamed “Hakuna Matata” and in Europe, the game was never released at all. This was due to Sony Computer Entertainment Europe (SCEE)’s decision to not publish the game in that particular region. The reason behind their decision was never made clear.

Afrika is a simulation type game where the player is put in the shoes of a wildlife photographer and is tasked with taking photos of specific animals. The game is comparable to Pokemon Snap on the Nintendo64. The game itself only received slightly above average review scores from critics but the game’s soundtrack was awarded “Best Original Video Game Score” by The Hollywood Music Awards in 2008.

If you’re looking to obtain a copy of Afrika just to play and enjoy, the Japanese version is more common and therefore not as expensive, however, like most Japanese releases, it isn’t playable in English. On the other hand, if you’re a collector, I’m sure you’d rather have a more uncommon game in your collection. In that case, you would want to go for either the North American version of Afrika or the Korean version, Hakuna Matata, both of which are fully playable in English.

This is a dungeon-crawling JRPG developed by Zerodiv originally released on the PSP as “Class of Heroes 2” back in 2009. It was ported onto the PS3 in 2010, published by Acquire and only released in Japan. In 2015, the game was released in North America with localization done by Gaijinworks and published by MonkeyPaw. However, a very small amount of physical copies are known to exist. Multiple sources indicate that there were only about 3000 copies sold but I cannot confirm this to be a fact since there are no official numbers.

Class of Heroes 2G is pretty much what you would expect a dungeon-crawling JRPG to be. The player builds a party then proceeds to go on an adventure whereby blades are swung, magic is cast and monsters are slain. You can also choose to play the game on the PS3 while utilizing a PSP or PS Vita as a controller and second screen as shown in the game’s launch trailer.

So, if you’re a JRPG fan or collector and would like to have a copy of this game, you should be able to still find a few online. Just be prepared to spend a bit more than a fiver since even used copies change hands for about the same price as a brand new release. It’s also worth mentioning that there’s a VideoGamesPlus (VGP) variant which features different artwork on the game disc still available for purchase on the VGP Canada website.

I know the idea of a sports game being rare is a bit jarring to say the least but let me assure you that it is rare. It might even be the rarest game on PS3. NBA Elite 11 is also a mobile game released on iOS but that’s not the version I’m talking about. The one I’m referring to is the version which was scheduled to be released on PlayStation 3 and Xbox 360 on October 5th 2010 but was later cancelled because EA’s internal reviewers found the game to be unsatisfactory after its eighteen-month development cycle despite having already released a marketing video of various NBA stars praising the game for its intricate controls. However, a very small amount still made it into circulation.

Towards the end of the game’s development, a demo was released but it was plagued with glitches. NBA Elite 11 is, as you would imagine, a basketball game. It’s just not a very good one. So, if you’re looking for a fun basketball game to play with your friends, this is absolutely not the game for you.

Now, the game is extremely rare but finding one isn’t the problem. If you really wanted one, you can find a few online. The main issue is that the prices they’re currently listed at are obscene. Even though NBA Elite 11 is a bad game, it is still one of the rarest games on the PS3. It also has the NBA license so it appeals not only to gamers but to basketball fans as well.

Another PlayStation exclusive, “Rain”, also known as “Lost in the Rain” in Asia is an adventure game developed by SCE Japan Studio and published by Sony Computer Entertainment. The game was originally released in 2013 and was only available as a digital download from the PlayStation Network (PSN) in most regions. It was only released physically in Japan, Hong Kong and Taiwan. The Japanese physical release lacks an English language option as most Japanese releases do, so the only way to obtain a physical copy playable in English is to track down the Hong Kong and Taiwan version which includes English and Traditional Chinese language options.

Lost in the Rain puts the player in control of a young invisible boy who can only be seen as his silhouette is revealed in the rain. When he is beneath shelter, his movements can only be identified by his footprints. These mechanics are utilized by the player to navigate through the game’s puzzles as the boy is chased by strange creatures which roam the streets and are similarly invisible. It’s a very unique experience, to say the least. Lost in the Rain received above average review scores and was mainly criticized as being a game with incredible potential but subpar execution.

Lost in the Rain is still quite a good game, one that you should experience, especially if you’re a fan of adventure games. However, finding a physical copy with the English language option isn’t easy and even if you do manage to find one, the price will almost definitely be quite ridiculous. Even used copies aren’t likely to be priced under $100. So, if your intention is just to play it, I’d suggest just getting it digitally on PSN, though I doubt anybody reading this would want to settle with just that.

JoJo’s Bizarre Adventure: All Star Battle is a fighting game originally released in Japan in August 2013. It was developed by CyberConnect2 and published by Bandai Namco. In April of 2014, the game was released internationally on PlayStation Network (PSN) with physical copies being made available through Amazon.com and ClubNamco.com. The international release was localized and included different names for several characters in order to be consistent with the recently released anime. This version of the game also included all the patches previously released for the Japanese version as well as an added arcade mode which wasn’t present in the original game.

JoJo’s Bizarre Adventure: All Star Battle allows players to fight against one another using characters taken from the manga. There are over 40 characters available in the game. The game’s story mode puts the player in control of the protagonists as they fight through an original tale inspired by the manga. The engine which the game was built with is called the “JOJO Shading Requiem” which allows the game to be uniquely stylized to look like the manga.

The Japanese version of the game isn’t terribly uncommon and can be obtained for less than $20 at the time of writing. However, the physical copies of the international release have become quite highly sought after. If you’re a fan of the manga or anime, you might want to secure a copy of JoJo’s Bizarre Adventure: All Star Battle before the price gets too out of hand.

That’s it for part 1! I hope you found the information helpful. Don’t forget to check out part 2 and 3 where I continue my list of rare games on the PlayStation 3.

Do you own any more rare games we’ve not listed here? Let us know in the comments section.

Call of Duty Zombies For Idiots: Origins and Timelines (11/17)